It takes good people at the core to make Pipeline Packaging one of the leading packaging distributors in the United States since 1988.

"The ESOP will allow the company to remain Cleveland Steel Container, keep the employees actively engaged, and support the customers with solid stable growth."

Ever since Chris Page first started building pail lines back in 1963, his organization embraced an employee-driven culture. However, he had a serious decision to make after nearly 50 years growing his business – who would succeed him as the owner of the company. After taking five years to consider what to do with the organization, it became clear that the Pipeline Packaging family was perfectly suited for an ESOP.

For decades, the organization made a commitment to hire talented employees and treat them with the utmost respect. Every employee already participated in profitability with an annual bonus and felt emboldened to identify new efficiencies or opportunities to improve the business.

This culture of improvement and support allowed the Pipeline Packaging family to grow. Additionally, our customers enjoyed the benefits of added growth and increased productivity. While research indicates that ESOPs have higher productivity rates and grow faster than privately held companies, those points were already true for Pipeline Packaging and Cleveland Steel Container prior to 2014.

Our employees were already emboldened to take ownership of their roles and be proud of our products and services. Simply put, the ESOP was the best succession plan for the future of the company. As such, Chris Page decided to sell 100 percent of the company stock to the employees.

“When our founding shareholder Chris Page decided to sell the corporation to the employees and the ESOP, it was almost like the employees were buying their home with no money down,” says Cleveland Steel Container Executive Vice President Dennis Puening. “They were no longer renters of the company they helped build – they were now owners.”

An organization is only as successful as the people who drive it forward. At Pipeline Packaging, our ESOP is simply another step forward for a culture that empowered employees to be proud of their roles in the company and take ownership of the value they provide our customers.

Pipeline Packaging, the leading industrial container distributor in the United States, was established in 1988 by Cleveland Steel Container Corporation.

People at the Core of Packaging

With 25+ years of experience, we understand that people make products, services, companies and brands successful. Let our proactive approach, timely communication and genuine concern for your success be a part of a winning strategy for you and your company.

END_OF_DOCUMENT_TOKEN_TO_BE_REPLACED

Good People at the Core. How would you describe your role at Pipeline? Taking care of our customers and my sales rep, Scott 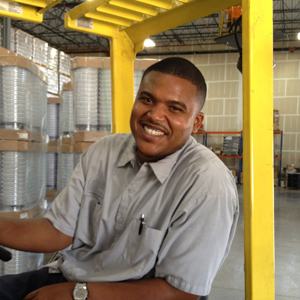 How would you describe your role at Pipeline? Run the day-to-day operations of the Dallas warehouse